A few days ago, the General Department of the National Energy Administration officially issued the “Announcement on the Key Special Projects ‘Technology Boosts Economy 2020’ to be Approved in the Energy Field”. According to the selection principles of ensuring energy security, promoting industrial upgrades and supporting high-quality energy development, ten projects – including a multi-level virtual power plant platform, development of an adaptive gas turbine core component technology, and further research of high-performance fuel cell membrane electrode assemblies (MEA) with extended durability, as well as their applications in heavy-duty vehicles – were chosen to be included in this program. The project information is now available; please provide feedback and suggestion within seven working days from the date of publication.

Among them, the Hydrogen Cloud Chain has learned that two of the ten applications are related to hydrogen energy, the topics of which are the aforementioned MEA R&D with applications in heavy-duty vehicles, and the Sanbei Area wind and solar base and hydrogen energy storage facility focusing on proportional coupling technology and industrial promotion. 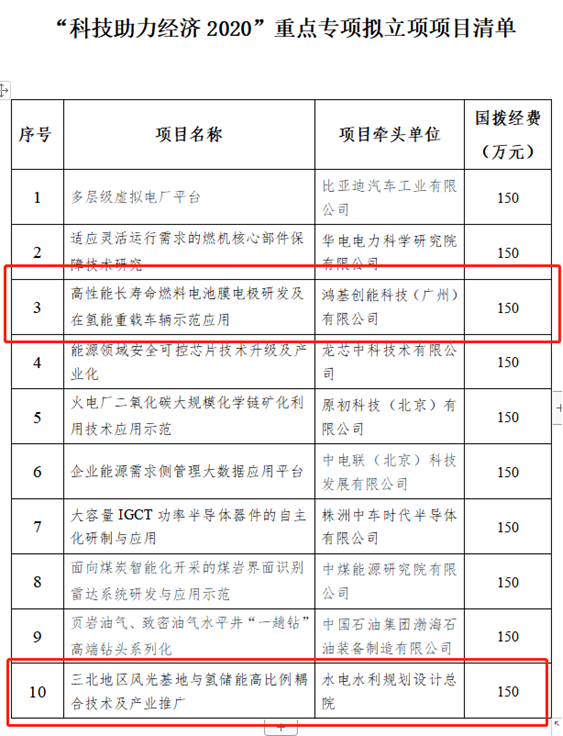 This project is led by SinoHyKey Technology (Guangzhou) Company, Limited. The Hydrogen Cloud Chain learned from Dr. Zou Yuquan of SinoHyKey that the core aspect of this project is to develop the MEA for heavy-duty applications; Feichi Automobiles will provide their latest hydrogen-powered heavy-duty trucks for purposes of demonstration.

From public sources, the Hydrogen Cloud Chain can gather that SinoHyKey is committed to the large-scale localization and industrialization of high-performance MEAs for proton exchange membrane fuel cells (PEMFC), and strives to provide economical and effective fuel cell core components for domestic and international manufacturers.

Located in the Guangzhou Development District, the company is dependent on the core technical team, comprised of National Academy of Engineering of Canada member Dr. Ye Siyu, Dr. Zhou Yuquan, and Dr. Tang Junke, who have over twenty-five years of experience with R&D and fuel cell industrialization as part of internationally renowned companies. Their contributions and interests include setting up a hydrogen energy innovation centre and various academician workstations, promoting independent research and development of hydrogen fuel cell technology, developing low-platinum catalysts for fuel cells, producing hydrogen by electrolysing water, automotive R&D, and general innovation in key technologies.

This project is led by the General Institute of Hydropower and Water Resources Planning and Design; according to public information, they are an institution approved by the State Council to reform the electric power system in December 2002, and is a subsidiary of China Power Construction Corporation. It is the only public institution in China that undertakes the centralized management of hydropower, wind power, and solar photovoltaic power generation technologies.

Prior to this, the leaders of the relevant departments of the National Energy Administration inspected the fuel cell research and its technological results, including independent research and development of core materials, stacks and systems, hoping to fully promote the advancement of the industrial chain. There are also media reports on the industrial hydrogen fuel energy storage plan. The preparation of this content has recently been completed and it is likely to be reported to the State Council soon, with an expected release in 2020. In particular, the “Guiding Opinions on Energy Work for 2020” mentions the progression of the hydrogen energy industry, which seems to confirm the release of the plan this year.